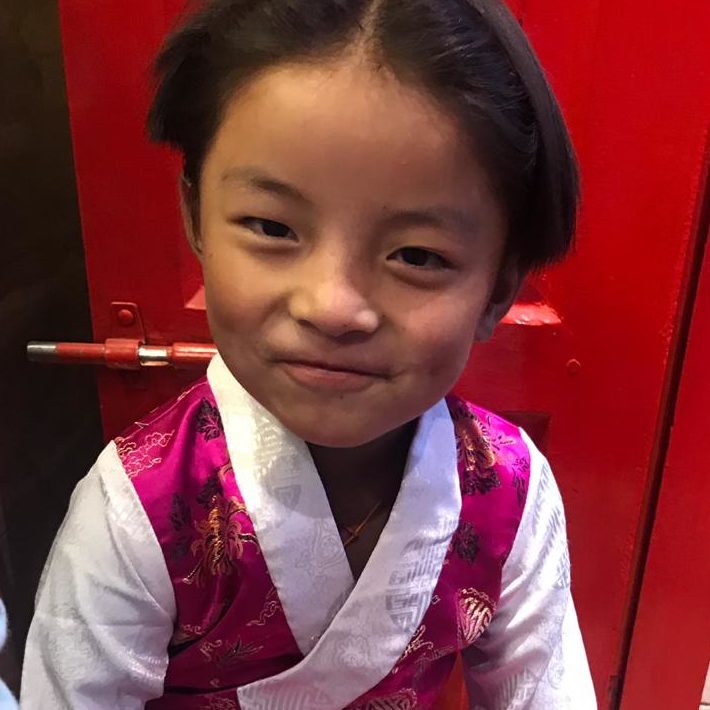 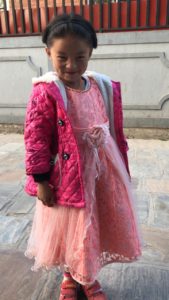 On my last visit to Nepal two years ago, I was a guest in Tenzing's house. There, along with Phunjo´s two children, there also was a little girl, Tenzin.

At the time, Tenzin was just six years old. Small, petite and with a pretty face that hinted at the Tibetan origin. Her clothes were filthy and the condition of the girl could almost be described as neglected.

Tenzin was very shy, barely daring to talk and immediately hid behind Phunjo when I entered the room. Tenzin comes from a poor family of farmers from the Lower Tsum region, which is northwest of Kathmandu, about a seven-day walk to the capital Kathmandu.

Tenzin was very shy, barely daring to talk and immediately hid behind Phunjo when I entered the room. Tenzin comes from a poor family of farmers from the Lower Tsum region, which is northwest of Kathmandu, about a seven-day walk to the capital Kathmandu.

Her parents, blessed with tens of children, after long talks were ready to allow Tenzin to attend school in Kathmandu.

At the time, an option was a boarding school outside of Kathmandu for children with Tibetan background. A place was reserved, funding secured and nothing could go wrong ... Phunjo took Tenzin home with her and arrived in Kathmandu at the same time as me. Everything seemed to be in order.

She told us Tenzin could not go to school anymore, she would be needed to work in the field. She would make here way on foot to pick up Tenzin again. When we talked to Tenzin about it, the disappointment was great and the tears ran down her little face.

A solution was needed and fast. Were we not obliged to help the girl? We had written permission from her parents to go to school, so it was urgent to get Tenzin out of the danger zone. The signature was done, by the way, by fingerprint, since both parents were illiterate. Illiteracy in Nepal is still common and education is still not compulsory.

A Tibetan school about 30 km outside of Kathmanduwas immediately ready to take her in at the local boarding school.

There were six days left to bring her to the new school before her mother would had probably turned up in Kathmandu. Haste was required and Tenzin was there with zeal and bright eyes when we told her what would happen now.

Almost at a run we hurried through the Buddha shopping center near Phunjo's apartment, a long list had to be worked off.

Tenzin was allowed to pick everything herself and today I still have to smile because school pack, as well as shoes, clothing and all other required things in pink and princess style. Her eyes radiated in competition with the sun and she asked again and again, if that was really all for her?

The following bath with thorough body cleaning she did not find this amazing, but let it go through without grumbling.

Day three until the supposed arrival of Tenzin's mother, everything was ready, packed and we took Tenzin together with a cousin from Phunjo to the bus station, where Tenzin traveled with her the new school in a day.

Now two years have passed, Tenzin has grown a great deal and I was allowed to see her again two weeks ago, on the occasion of her visit to Phunjo this year.

It is hard to describe how happy I was when I was allowed to embrace this once timid girl in her arms.

Tenzin is just bursting with zest for life, loves to go to school and her grades are only the best. She has shown me with great pride her exercise books, how she can already write and read, how she can calculate and draw.

She still loves pink and feels like a princess.

Her tuition fee is 600.-US Dollars per year including boarding school and we will of course pay for those.

Tenzin now has a real chance to lead her own self-determined life, has a chance to learn a profession, to go new ways, beyond rusty traditions and humiliating images of women.

Tenzin stands for all these children, who require us to act and to intervene courageously.

Here is a letter Tenzin´s school sent us:

Namaste and tashi delek! How are you? This email is from srongtsen tibetan school.

Thank you so much to both of you for sponsoring Tenzin chokyi Lama.As she is the seventh child of her family and her dad was expecting her to be a baby boy but she was born as a beautiful girl in this world.all her six sister are in village, and helping her parents in the field and doing village works but luckily phunjo decided to take tenzin chokyi to Kathmandu for a education. as dharma means not only offering the butter lamp and praying, you have to help from the inner of your heart to other beings. So, it’s a good karma for you two that you are giving her a golden opportunity to study here in Kathmandu and beginning the second life to become a brighter future.phunjo was telling me about you and she also mention that you are coming to Nepal soon. So, please kindly visit our school.Phunjo is helping to the poor kids but behind all of this you are the main one who is helping a lot. That’s why, we really appreciate you.Thank you! 🙏🏻

email from Sonam Wangmo, one of Tenzins teachers

This mail we recieved Oct 2018